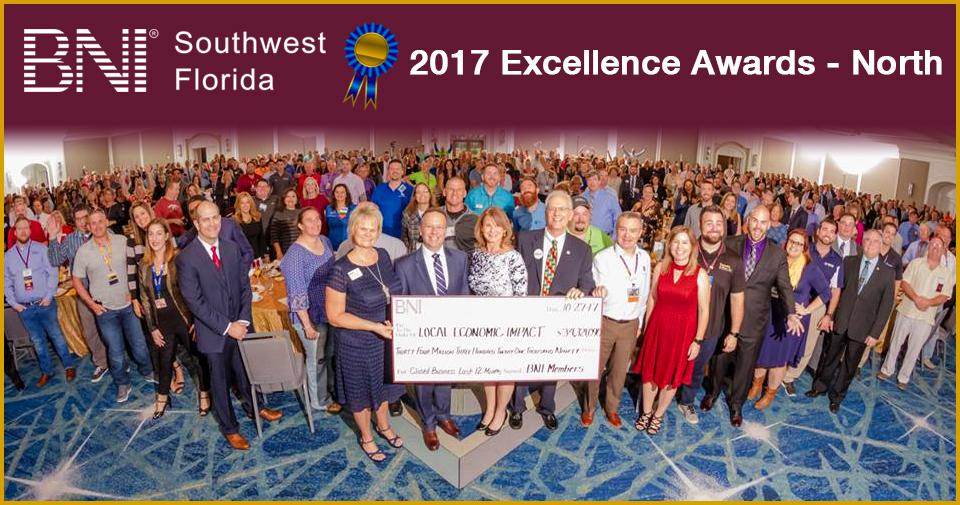 For the sixth year in a row, BNI SWFL has remained in the top 10 percent of all the regions in the WORLD! In the past 12 months, Southwest Florida passed over $68 Million in closed business amongst its 1500 members, almost $35 Million of that was generated for members in Charlotte, Sarasota and Manatee Counties! A record crowd of 650 gathered to celebrate and recognize the accomplishments of members and chapters over the last year.

Congratulations to the this years 5 year members. 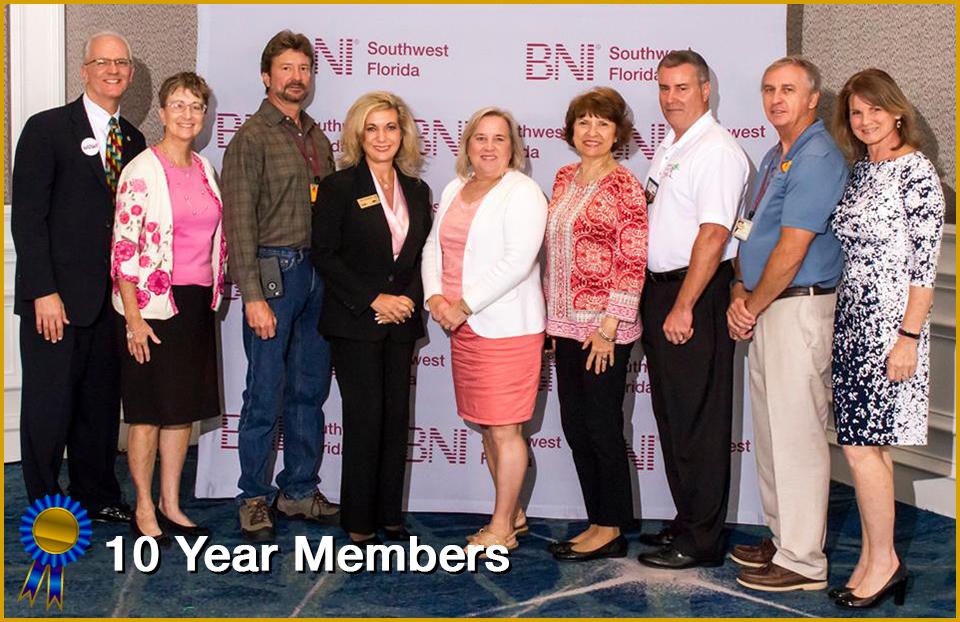 These BNI SWFL veterans have been members for 10 years. 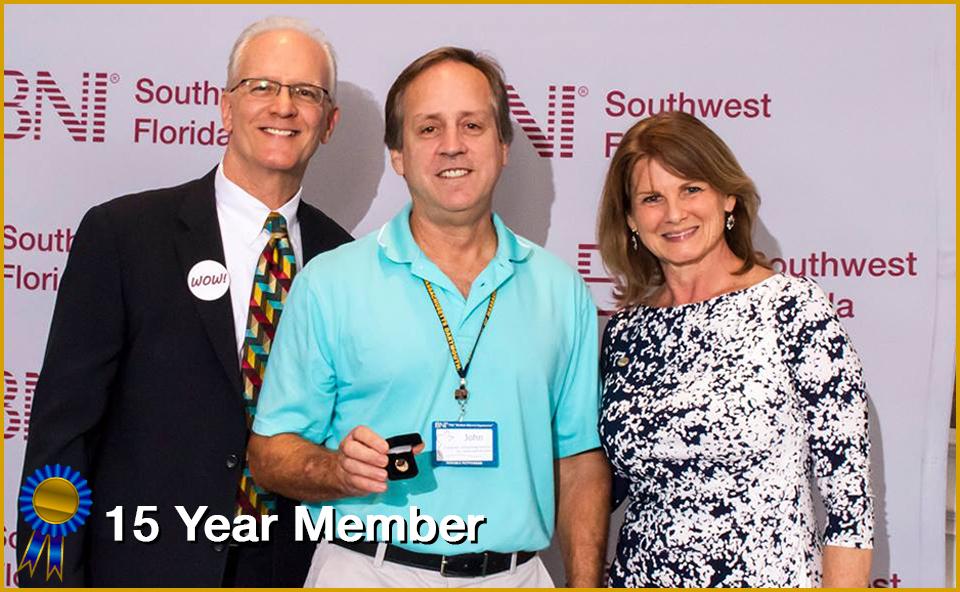 Congratulations for achieving 15 years as a BNI SWFL member.

Director Becky Brantner with Purple Monkey Print and Design presented our third year of Education Equals Excellence Awards, or as we refer to it, E Squared. To qualify for this award a member needs to have attended all 5 of the Advanced Training Modules. This year we have 25 members who have completed all 5 modules.

Susan Howard with Employers Resources Plus from Circle of Success

Jennifer Jordan with Tre J Entertainment from Circle of Success

Deborah Metcalf with A-Z Auto Repair from Referrals to Riches

Trude Moyer with Express Employment Professionals from Business by the Bay 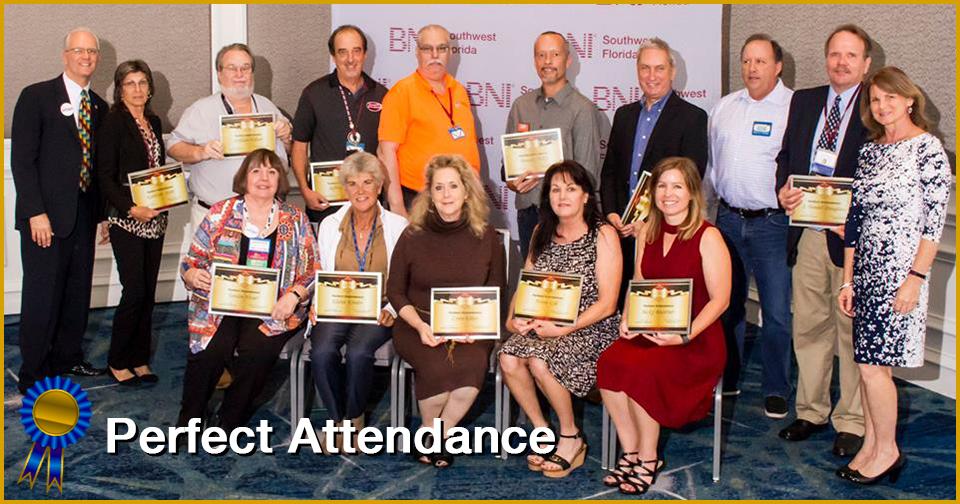 Director Robert Lauser with Grim Reaper Pest Solutions announced the 15 winners of the Perfect Attendance award. Members must have been a member for the entire year from October 1, 2016 to September 30, 2017. These members did not miss any meetings, were never late, had no medical and did not have a sub.

John Collins with Landscape941 from BNI Circle of Success

Elaine Kinder with The Golden Rule Painting, Inc from BNI Circle of Success

William Wilson with The Woodcrafters from BNI Cutting Edge Professionals

Ambassador Paul Jorgensen with Farm Bureau Insurance recognized the top members who invited the most visitors to their chapter. These Members, who have worked very hard to help their chapters grow and its referrals increase, are vital to their chapter's success. The following members have gone above and beyond, and their chapters are lucky to have them! 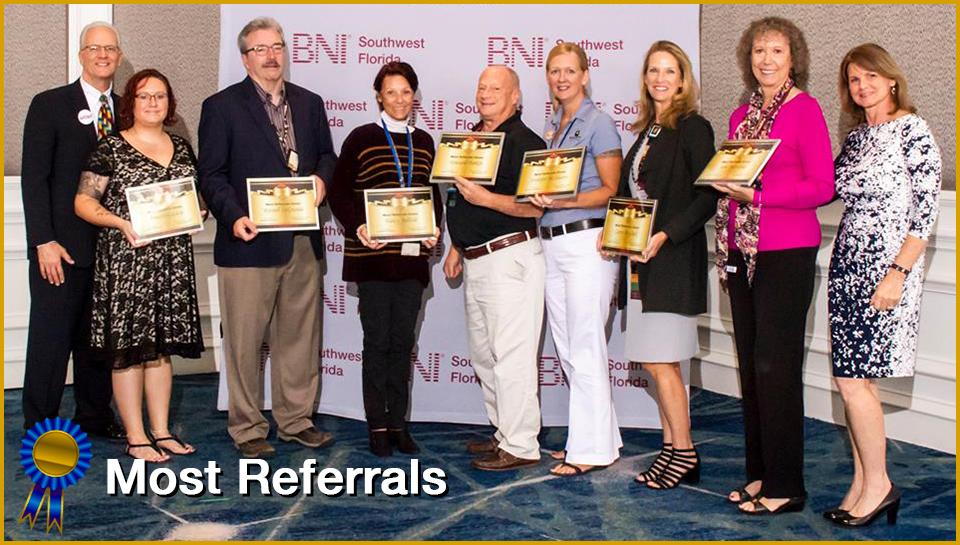 Director Mark Miles of Law Offices of Marc J Miles, PA announced the top seven members who passed the most referrals to their fellow members.

Russell LeGrande of LaMaison Homes and Inspecitons from Circle of Success

Howard Parkin of When & How Concierge Servicess, LLC  from Money in the Morning

Nancy Bellisle of Juice Plus from Trusted Professionals 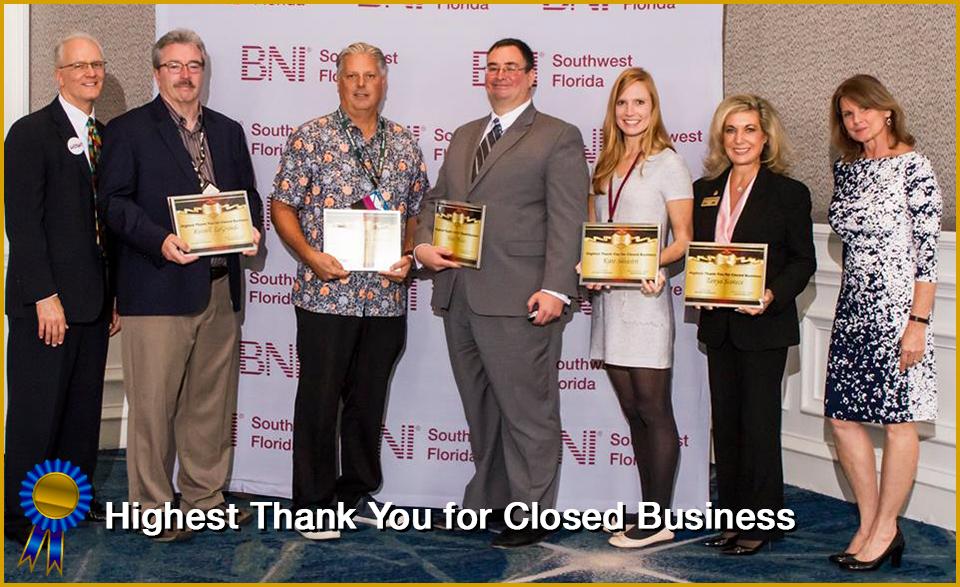 Director Consultant Glenn Scharf with the Scharf Group announced the top five members who passed the most Thank You for Closed Business to their members. This is the epitome of Giver's Gain®. Most of these members will tell you that the ability to have reliable people they can refer their clients to is just as important as the business they receive.

Russell LeGrande of LaMaison Homes and Inspections from Circle of Success

Nick Flerlage of Re/Max Alliance Group from Rapid Referrals Plus

Ambassador Nimie Gill with Suncoast Web Marketing and Director Randy Corywell of WRC Associates announced this year's Medallion Chapters, recognized based on the number of members in the chapter. Chapters needed to maintain their size for three consecutive months from July 1 to October 1, 2017. 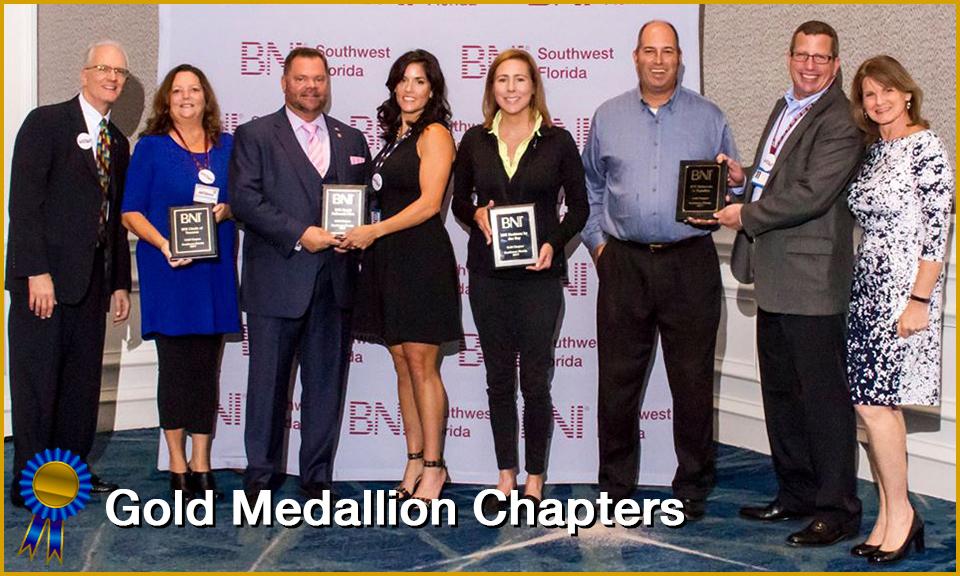 Rapid Referrals Plus          Referrals in Paradise

Director Consultant Randy Coryell with WRC & Associates announced this year's Platinum Presidents. To qualify, Presidents participated in weekly calls with their director, attended monthly Roundtable or had representation, ran the meeting according to the BNI Agenda and deomonstrated Leadership Skills that resulted in success during the year.

Rob Reynolds of Robert Reynolds Landscaping from Success in Action

Anthony Saputo of Saputo And Associates, Inc from Money in the Morning

Russ Williamson of Platinum Planning from Referrals in Paradise

Tim Hudson of ODI Consulting, Inc from Referrals in Paradise

Pamela Maxstadt of Bank of the Ozarks from Harbor Professionals

Julia Miller of Firestar Capital Investments from Success in Numbers

Andrea Needham of LaMaison Homes and Inspections from Endless Referrals

Kris Pike of Citrues Plumbing of Venice from Rapid Referrals Plus 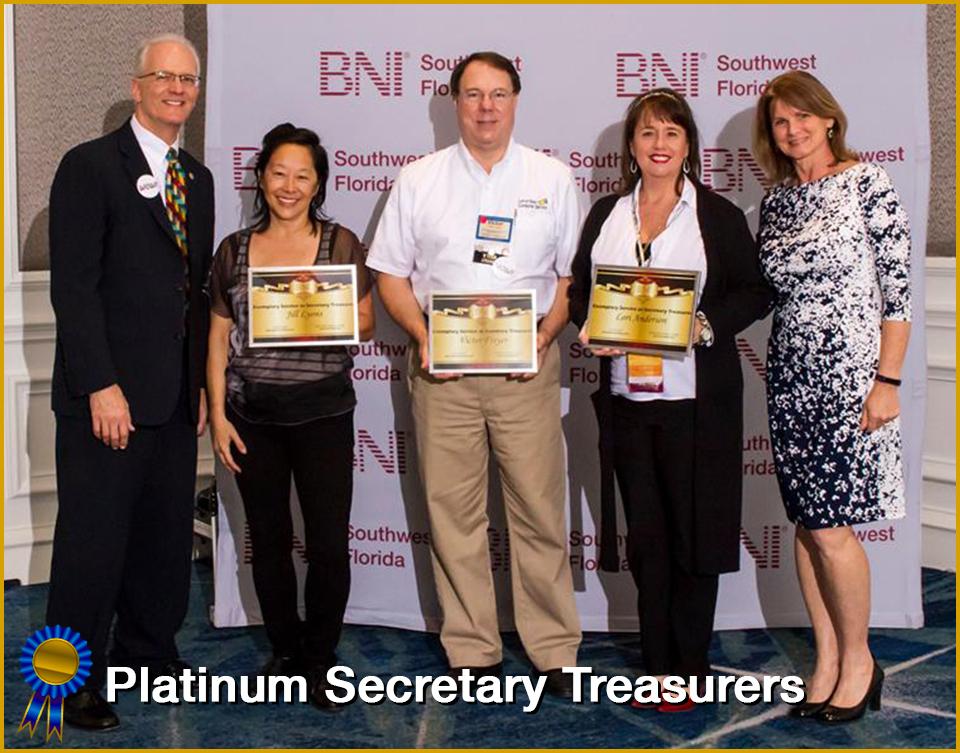 Regional Administrator Nadine Schleicher with announced this year's Platinum Secretary Tresurers. The awards were based on the following: Submitting reports, renewals and applications to the regional office in a timely and effective manner, communicating effectively with the Regional Office and Director, entering the speaker rotation in BNI Connect and maintaining accurate records.

Christina Gay of WrightWay Emergency Services from Rapid Referrals Plus

Director Consultant Glenn Scharf with The Scharf Group and Ambassador Mary Taylor with Mary Kay Cosmetics announced the Nominees for Rookie of the Year as well as the winner. Each chapter submitted a name of a member who has been in the chapter for less than one year as Most Valuable Rookie. Their nominating committee made of up the President, Vice President, Secretary Treasurer and Membership Committee chose their nominees based on referrals given, visitors brought, willingness to serve and most importantly showing a Giver’s Gain attitude right from the first day.

Kortnee Gonzalez of Echt Architects, LLC from Business by the Bay

Brian Stone of Stream from Circle of Success

Corey Cyr of Modern Woodman of America from Master Connectors

Arthur Trammell of The Venice Company from Money in the Morning

Chris Patek of Patek inspections, LLC from Partners for Profit

Lori Ann Roth of Learning and... from Referral Champions

Kristin White of Sonny's BBQ from Referrals in Action

Margaret Kennedy of Sarasota Animal Hospital from Referrals in Paradise

Wayne Miller of Sand Dollar Enterprises of SRQ, LLC from Referrals to Riches

Lisa Karrat of Just Be Therapeutic Massage from Success in Numbers 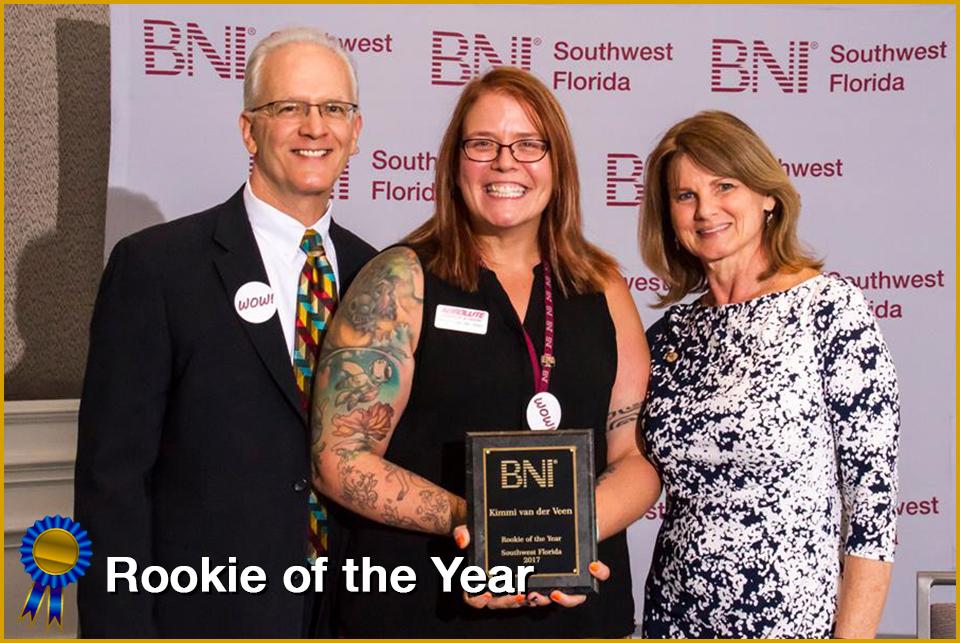 This year’s winner of the Rookie of the Year has raised the bar on what can be done in a short amount of time with persistence, tenacity and the right attitude. In just 42 weeks this member has brought 3 visitors and passed 70 referrals resulting in almost $38,000 in closed business for her members. She is extremely energetic, has a great attitude and is totally committed to her chapter doing 99 One to Ones during her time in the chapter. 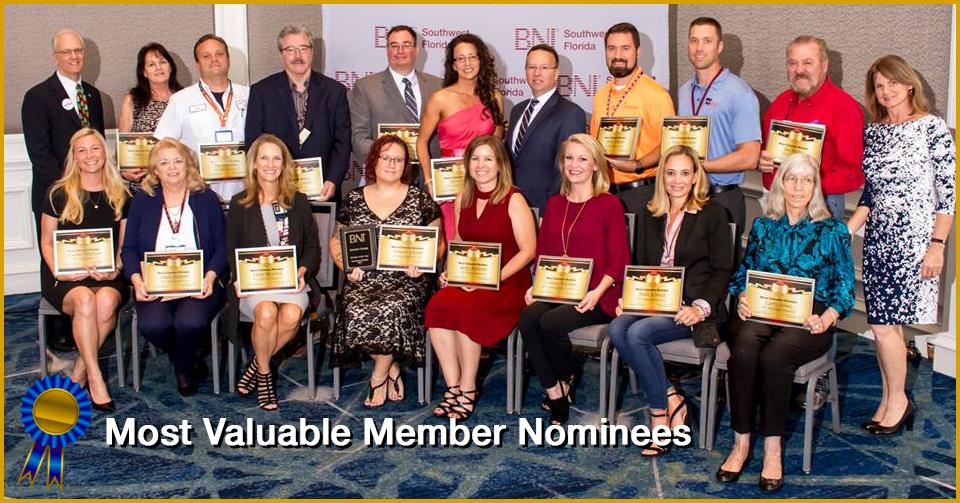 Director Consultant Robert Lauser with Grim Reaper Pest Control and Ambassador EJ Semmerling with Edward Jones announced Nominees for Most Valuable Member as well as the winner. Most of the nominees have served in a leadership position at some time during their membership. Many have been members for several years and still continue to pass referrals, bring visitors, mentor new members, serve their chapters and most importantly exude a Giver’s Gain® attitude.

Glenn Scharf of The Scharf Group from Key Referrals

Marc Miles of Law Offices of Marc J. Miles, PA from Money in the Morning

Devin Johnson of Insurance Consultants of Florida from Referrals in Action

Tim Donohue of Bill the Plumber, Inc from Referrals to Riches

This year's Most Valuable Member has been applauded by the members of her chapter for her professionalism and positive attitude. With a total 442 referrals which lead to over $186,190 in closed business, this member also brought 5 visitors to the chapter last year. She makes no excuses for being too busy to help fellow members and her chapter. 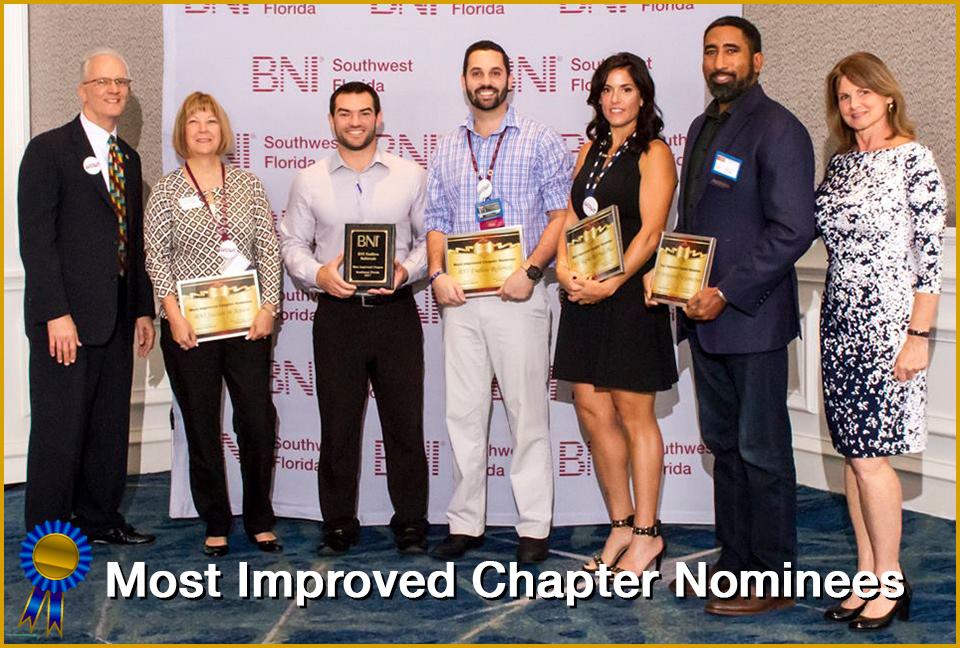 Rapid Referrals Plus          Success in Action

This year's Most Improved Chapter raised their retention from 46% to 54%, and they more than tripled the number of visitors throughout the year going from .81 to 2.63 visitors per week.  October 1, 2016 they were 45 and red in the traffic lights, October 1 of this year they were 85 and green! They worked hard with their Director and it certainly paid off. They are full of enthusiasm and still focused on growth. 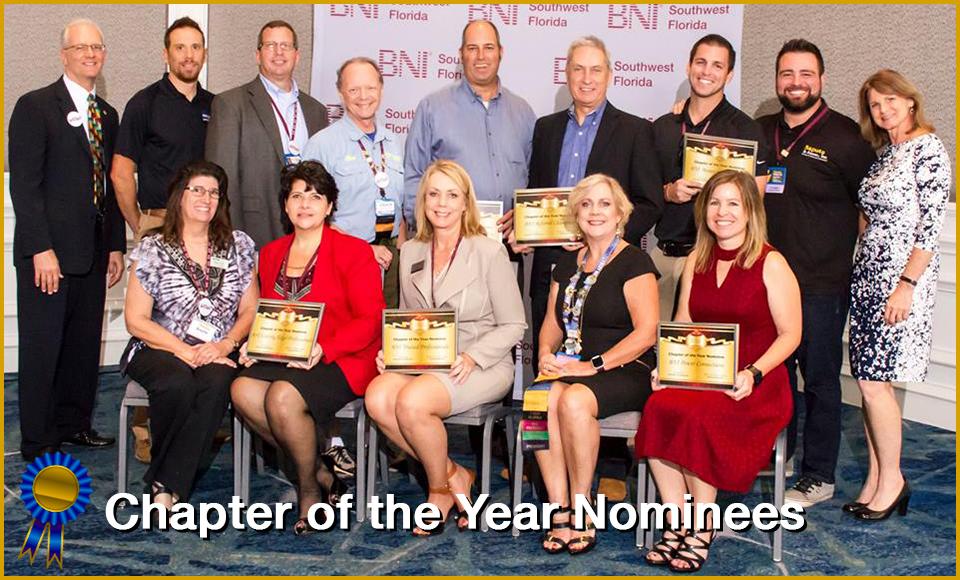 Director Consultant Christi Geib presented the final award of the evening, Chapter of the Year. Nominations for Chapter of The Year were based on the following: Chapters must be in the Yellow or Green in the Traffic Lights all year. They must maintain an average of 35 or more members, and have at least 1 Million dollars in TYFCB. A willingness to work side by side with their director, enforce policies, encourage growth and mentor their members to increase retention all with a positive attitude was also considered

This year's Chapter of the Year maintained Green status in the Traffic Lights 11 of the last 13 months. They increased members by 10, increased retention, referrals and conversion and reduced their absenteeism to 1.64%! This chapter lives the Giver’s Gain® philosophy, while having fun.

The Latest From BNI